If you’re addicted to baking bread, trying new things, and going on wild bread adventures, then sprouted bread is likely right up you’re alley. You’ve probably mastered your sourdough game, and are looking to expand your horizons – sprouted bread is a fantastic and highly nutritious food to add to your baking game. Whether you’ve recently joined the sprouted bread bandwagon, or have been riding for a long time, knowing the optimal storage options for sprouted bread won’t hurt your end game, that’s for sure.

When considering long-term storage, the best place to keep your sprouted bread isn’t in the fridge, but in the freezer. For short-term storage, such as within the first five days, then on the counter in a paper bag or a bread bin is fine. While the fridge is good for preventing mold, it can lead to crumbly bread.

Read on for more details on properly storing your homemade sprouted bread.

What is Sprouted Bread?

First and foremost, a great place to start is by knowing what sprouted bread is, before understanding the best way to maintain its freshness and how to store it

The basic difference between sprouted bread and regular bread is that sprouted bread is made from whole grain, such as wheat, spelt, barley, einkorn, and oats, that is allowed to germinate and then ground into flour. From there, a combination of the various flours is mixed with water, honey, and yeast to form a dough, allowed to rise, and then baked in the oven. The results are a fresh loaf of super health, easy-to-digest, sprouted bread.

Have I heard of Sprouted Bread Before?

While it may seem like it’s all the rage at the moment, sprouted bread has been around for a couple of thousand years or so. You may or may not have heard of Ezekiel Bread. For those who haven’t heard of it, this is the most common type of sprouted bread found in stores and recipe internet searches. Simply enter “sprouted bread” into your search engine, and you’ll find your search results are predominantly for Ezekiel Bread.

Back to the topic at hand, where and how best to store your homemade sprouted bread. As mentioned above, if you want your homemade sprouted bread to last as long as possible the absolute best place to store it is in the freezer. Simply slice it up before freezing it, so you can take as you need, rather than thawing a whole loaf and thereby limiting its shelf life. For more on homemade bread storage, I wholeheartedly recommend you read this post.

This handy table gives you an idea of how long, and where you can store your homemade sprouted bread:

Considering the above, if you’re storing it on the counter make sure it’s covered, such as in an airtight container, zippered plastic bag, paper bag, or a bread bin. Same for in the refrigerator or freezer (minus the bread bin and paper bag).

It’s really important to keep in mind that the sprouted bread will last longer and maintain freshness if you ensure that the bag or vessel you’re using is properly sealed in between use. 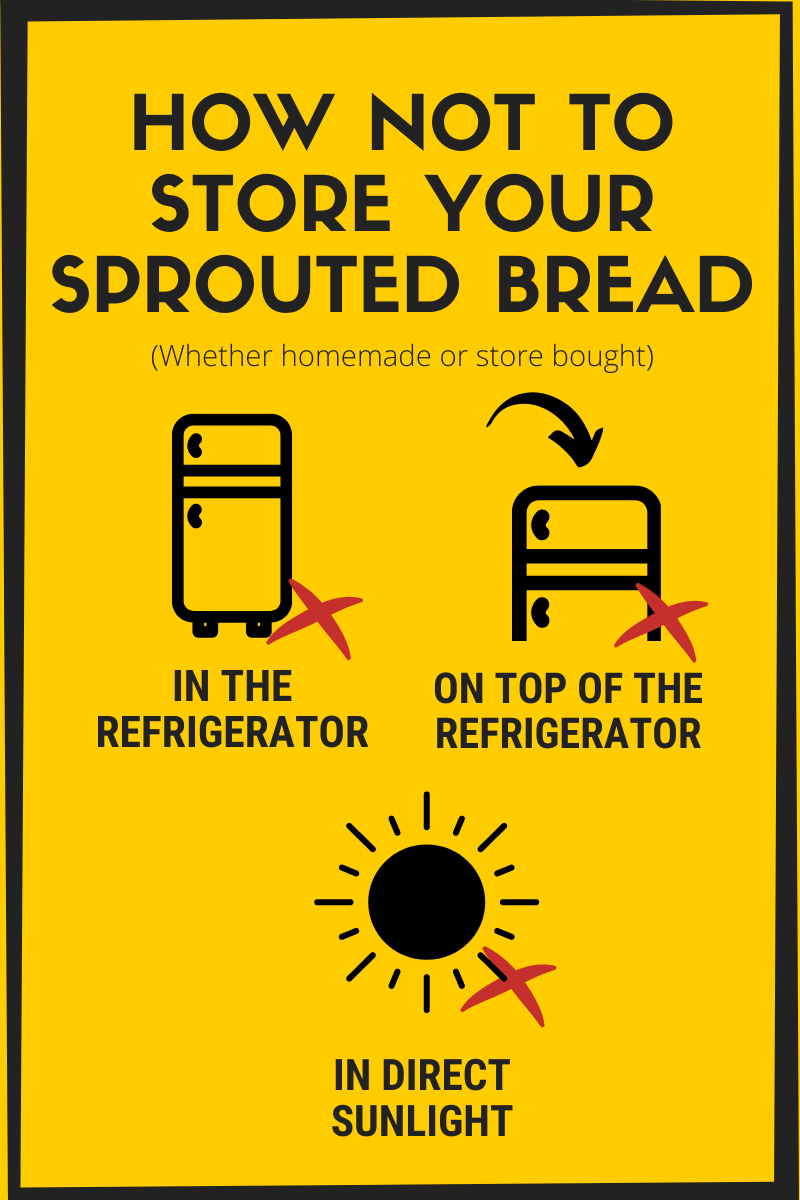 We’ve already mentioned why you should avoid storing your sprouted bread in the refrigerator, but you’ll also want to avoid storing it on top of your refrigerator. Why? Well, the warmth will shorten its shelflife and likely allow for mold to grow as the bread is preservative free.

Additionally, if you’re storing it on your counter, make sure it’s in a dark spot. So, if not in a dark corner or bread bin/box, you might want to store it in a drawer or cabinet of your pantry to ensure your homemade sprouted bread isn’t getting any sunlight. You’re avoiding the sunlight for the same reason you don’t want to put it on top of your refrigerator. The heat will simply encourage mold.

All in all, when it comes to whether you should store your homemade sprouted bread in the refrigerator, it’s pretty simple – the answer is no, not really. If you’re planning on consuming the loaf within a couple of days, keeping it in a dark spot on your counter is more than good enough. If you think it’ll take you a little longer, the freezer is your best bet (just make sure to slice it so you can take as much, or as little, as you need).

Enjoy your homemade sprouted bread and may it bring you much health and happiness!

Hi, my name is Amit. I started baking at a young age at my father's bakery. I hope I can answer some of your questions and hopefully you will find some hidden gems to help you out with your home baking skills.

link to The Best Bread Slicers that Will Make Your Life Easier: Look No Further!

There is something exceptional about baking your very own bread. From sourdough, and challa to sandwich bread and baguettes - it’s all wonderful. One of the issues with baking your own bread,...

Continue Reading
link to What's the Benefit of the "Ear" on Sourdough Bread and How to Ace it?

My name is Amit and I've been a baker for over 20 years. I started working at my father's bakery when I was 9 years old.
Over the years I have had many home bakers asking me for assistance. I was always glad to help. After answering so many questions, with the help of my wife Dana and my father, we decided to start this blog to help the home baker with their baking problems and answer their questions the best we can.

This site is owned and operated by Dana Zomer, thebreadguide.com is a participant in the Amazon Services LLC Associates Program, an affiliate advertising program designed to provide a means for sites to earn advertising fees by advertising and linking to Amazon.com. This site also participates in other affiliate programs and is compensated for referring traffic and business to these companies.