The “ear” of a loaf of sourdough bread is the work of strategically scoring the dough after enough time has allowed for the dough to ferment to perfection. Acing the ear, requires a quick and steady hand, the right angle of between 30 to 45 degrees and a score that measure anywhere from ½ an inch to 2 inches (1 ½ – 5 cm) deep, while choosing the right spot on the dough ball.

Overall, the best way to get an ‘ear’ on your loaf of sourdough bread, is to score confidently and not read too much into the hows and whys. Ultimately you should enjoy the process and forget stressing about the resulting look. As nice as it is to make a gorgeous loaf, eating the loaf and enjoying every bite is a good goal. If, however, you want to know more about the ins and outs of the “ear”, read on.

A Closer Look at the “Ear”

A successful “ear” is an indication of slaying each step of the process, demonstrating that the person baking the bread

That oh-so-coveted “ear” on a loaf of sourdough bread is the result of a dough that has been allowed to ferment up to between 80-90%, this leaves just enough action within the dough to provide one last super rise in the oven during baking. This, and scoring. But first, let’s talk about fermentation.

What’s Fermentation Got to do With it?

Fermentation is pretty much everything when it comes to sourdough bread. From using a starter that is primed and ready to be fed to allowing for the optimal amount of time for bulk fermentation as well as the final fermentation, and everything in between.

Using an active starter, essentially means that there are very hungry microorganisms that will create lots of gas, leading to a more airy loaf of sourdough bread. The opposite would be true if using a less active sourdough starter.

Once you’ve mixed your ingredients, and performed a few stretches and folds, it’s time for you to allow the dough to rest during its first ferment, the bulk fermentation which is anywhere from 3 to 5 hours. You know your dough is ready for the final ferment when:

If your dough meets all of the above criteria, the dough is ready to be pre-shaped and then worked into its final shape. From there it goes into the final ferment stage, overnight in the refrigerator. Once it’s out of the fridge, pretty much ready to be baked.

What’s in the Scoring?

Scoring bread is a fairly recent enterprise in bread baking. Its earliest known mention was in France during the 19th century, when a scientist refers to cuts to the surface of the bread, thereby enhancing the appearance of the bread. Historically, scoring bread was a means to identifying the baker, as well as the price and weight. Another interesting note on the history of scored bread is that initially, it was baked mainly either in prominent Parisian restaurants or for families of wealth. 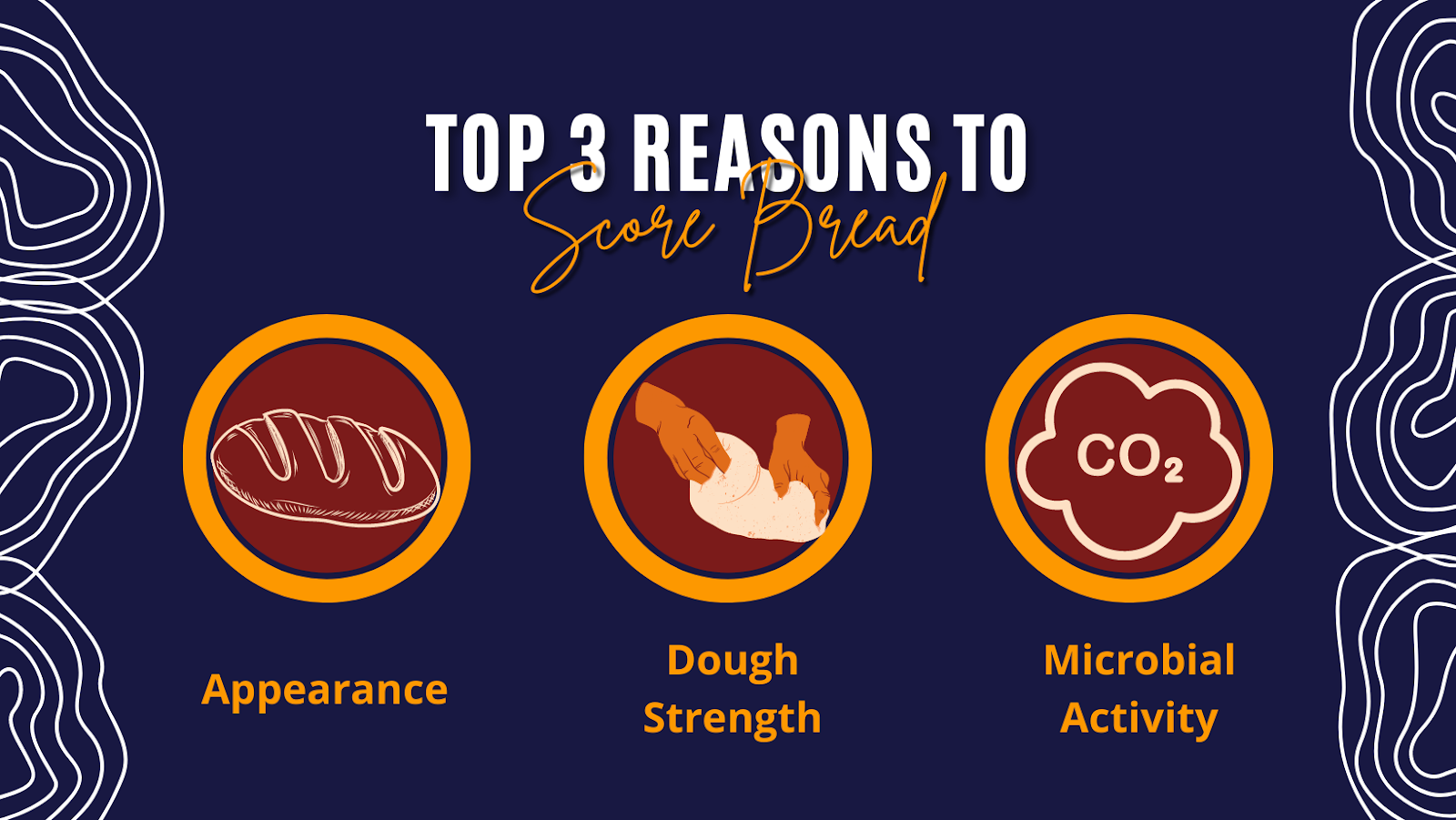 There are three main reasons why sourdough bread benefits from being scored:

While we often think that scoring is just about the appearance, and how pretty the loaf of bread will look once it’s baked, dough structure and microbial activity both impact oven spring. Good oven spring means great texture, another desirable attribute of sourdough bread.

A Basic Guide on How to Ace the “Ear”

There is a good bit of skill involved when it comes to sourdough bread. Getting the right combination of flour, whether wheat or otherwise, the hydration, the baking temperature, and the amount of time to get optimal results. When all is said and done, the coveted “ear” on a loaf of sourdough bread is the ultimate indicator and reflection of the work and skill as well as the science and art of bread baking at play.

A proper score on the dough provides a place for the trapped gases to escape, in a much more controlled manner – basically in one location, rather than anywhere and everywhere, all at once. Without the score, the gases will try to bust through wherever the pressure is strongest, resulting in random ruptures in the crust and a very rustic and homespun-looking loaf of bread. While there is absolutely nothing wrong with that, a simple score gives it a little more of a sophisticated and alluring aesthetic.

A Few Things To Consider When Scoring Sourdough Bread

Either a curved or straight blade can be used to score your sourdough bread. Ideally, you want to use a lame, blade with the specific purpose of scoring bread for the best results. You can, however, use a very sharp knife (or scissors in a pinch). Dipping the knife in water before scoring results in a much smoother cut, reducing jagged edges.

Note, if you are in that pinch, and you have to use scissors, you’re not quite scoring the dough. Rather, you will be cutting into the dough at a 45° angle a few times, depending on the length of the bread.

To get a good score the motion should be quick, smooth, and firm. Hacking at, or through the dough, will only create a jagged score, and will likely vary in depth leading to a not-as-pretty loaf, but probably tasty nonetheless.

The Shape of the Loaf of Bread

Depending on the type of bread being baked, there are two options for the scoring method being used:

If you haven’t purchased a Proper Blade yet, check out this bread baking kit that includes a blade as well as a proofing basket.

It is also important to take into consideration how proofed the dough is. If, for example, your dough is under-proofed, you will want to make sure that the cut is on the deeper side to make up for the lack of volume, creating an ideal environment for the bread to expand more during baking. If, on the other hand, the dough is over-proofed, you will want to perform a shallow score to prevent the dough from deflating.

The final proof, in the fridge, is also helpful. The cold dough is more firm, making it much easier to score. If you happen not to cold-proof, you can try putting your dough in the freezer for half an hour or so, and then score your dough.

Making sourdough bread is like the yoga of bread making – it is a slow, mindful process that forces you to appreciate the outcomes, no matter the look, while an ear on a loaf of sourdough is aesthetically pleasing, it isn’t necessary. The real indicator of success will be the experience and the final taste. If you enjoyed the process and it tastes good, what difference does it make if your loaf acquired an ear or not?

Hi, my name is Amit. I started baking at a young age at my father's bakery. I hope I can answer some of your questions and hopefully you will find some hidden gems to help you out with your home baking skills.

link to The Best Bread Slicers that Will Make Your Life Easier: Look No Further!

There is something exceptional about baking your very own bread. From sourdough, and challa to sandwich bread and baguettes - it’s all wonderful. One of the issues with baking your own bread,...

Continue Reading
link to Does Sprouted Bread Dough need to be Kneaded Longer and Why?

There’s something really special about making your very own bread. With your own two hands, you blend a measured amount of simple ingredients, mix, bake and infuse your home with mouth-watering...

My name is Amit and I've been a baker for over 20 years. I started working at my father's bakery when I was 9 years old.
Over the years I have had many home bakers asking me for assistance. I was always glad to help. After answering so many questions, with the help of my wife Dana and my father, we decided to start this blog to help the home baker with their baking problems and answer their questions the best we can.

This site is owned and operated by Dana Zomer, thebreadguide.com is a participant in the Amazon Services LLC Associates Program, an affiliate advertising program designed to provide a means for sites to earn advertising fees by advertising and linking to Amazon.com. This site also participates in other affiliate programs and is compensated for referring traffic and business to these companies.